(New York) – The United Nations Security Council should urgently impose a global arms embargo on Myanmar in response to the military coup and to deter the junta from committing further abuses, 137 nongovernmental groups from 31 countries said today in an open letter to council members. Governments that permit arms transfers to Myanmar – including China, India, Israel, North Korea, the Philippines, Russia, and Ukraine – should immediately stop the supply of any weapons, munitions, and related equipment.

Joint Call for a Global Arms Embargo on Myanmar 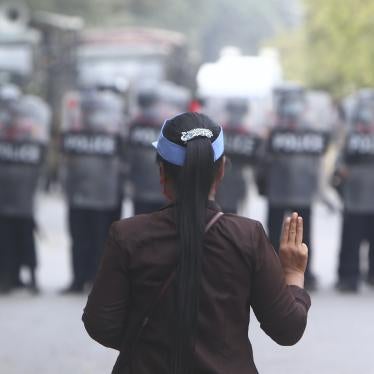 Since the February 1, 2021 coup, the Myanmar military has detained civilian leaders, nullified the November 2020 election results, and installed a junta, the State Administration Council, under a manufactured “state of emergency.” In the ensuing weeks, Myanmar security forces have used excessive and at times lethal force against demonstrators; arbitrarily detained activists, students, and civil servants; and imposed rolling internet shutdowns that put lives at risk.

“Given the mass atrocities against the Rohingya, decades of war crimes, and the overthrow of the elected government, the least the UN Security Council can do is impose a global arms embargo on Myanmar,” said Kenneth Roth, executive director of Human Rights Watch. “Supplying any equipment to the military enables further abuses and bolsters the junta’s ability to repress Myanmar’s people.”

The groups’ call reinforces UN Secretary-General António Guterres’s vow to “do everything we can to mobilize all the key actors and international community to put enough pressure on Myanmar to make sure that this coup fails.” The UN special rapporteur on Myanmar has called for a global arms embargo, while he and the deputy high commissioner for human rights have voiced support for targeted UN sanctions.

Security Council members should draft a resolution that bars the direct and indirect supply, sale, or transfer to the junta of all weapons, munitions, and other military-related equipment, including dual-use goods such as vehicles and communications and surveillance equipment, as well as barring the provision of training, intelligence, and other military assistance, the groups said. This should be accompanied by a robust monitoring and enforcement mechanism, including close scrutiny of sales to third parties that may be likely to resell such items to Myanmar.

Such sales violate international humanitarian and human rights law, which prohibit the transfer of weapons to a state where there is a clear risk of their being used to commit or facilitate serious violations.

The Security Council should also impose targeted sanctions, global travel bans, and asset freezes on the leadership of the junta and military-owned conglomerates.

Millions of people have taken part in anti-coup protests across the country, calling for the realization of their right to democratically elect their leaders. On February 16, protesters outside UN offices in Yangon called for increased international support. “We are happy the UN issues statements of condemnation, but we understand they are powerful and can do more,” Thurein, a 21-year-old student, told Frontier Myanmar.

The junta has deployed security forces, including the notoriously abusive Light Infantry Divisions, to crack down on demonstrators with teargas, water cannons, rubber bullets, and live ammunition, killing at least three people. Such violence perpetuates the security forces’ longstanding history of abuses against peaceful critics, as well as against the Rohingya and other ethnic minority groups. The commander-in-chief, Sr. Gen. Min Aung Hlaing, and several junta officials are directly implicated in crimes against humanity and war crimes in Rakhine, Kachin, Shan, and Chin States.

Until the Security Council acts, individual UN member states should adopt measures at the national and regional levels to block sales and other transfers of weapons and materiel to Myanmar, with the goal of extending an arms embargo to as close to a global scale as possible. Countries with existing arms embargoes on Myanmar, including the United States, Canada, Australia, the United Kingdom, and European Union member countries, should urge governments around the world to institute bilateral embargoes in the interest of building a broad coalition to oppose the flow of weapons to Myanmar. Governments should also strengthen monitoring and enforcement processes for existing embargoes, while ensuring the Myanmar military is barred from procuring dual-use goods and technologies.

For decades, the Security Council has failed to take adequate steps to respond to widespread violations of international human rights and humanitarian law in Myanmar. China and Russia have repeatedly vetoed or threatened to veto resolutions, blocking collective action. Despite this disunity, council members put out a collective statement in early February calling for the release of all those arbitrarily detained and the protection of the country’s democratic institutions. Members should build on that newfound consensus by urging China and Russia to support an arms embargo resolution that would ground a global effort to shield the people of Myanmar from a return to autocratic rule, the groups said.

“Cutting off the military’s access to arms, hardware, technology, and training would tell Myanmar’s junta and those who profit off it that there are real consequences for their crimes,” Roth said. “It would also signal to the millions of people marching in the streets, risking everything for democracy and freedom, that they are not alone in this struggle.”