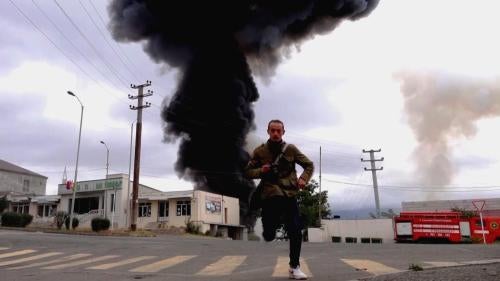 (Berlin, December 11, 2020) – Azerbaijani forces carried out apparently indiscriminate attacks in Stepanakert in violation of the laws of war during the conflict in Nagorno-Karabakh, Human Rights Watch said today.

A Human Rights Watch on-site investigation in Stepanakert, Nagorno-Karabakh’s largest city, found numerous incidents in which Azerbaijan’s forces used inherently indiscriminate cluster munitions and artillery rockets or other weapons that did not distinguish between military targets and civilian objects. Evidence relating to an attack on October 4, 2020, indicates that multiple strikes hit residential homes in less than a minute suggesting possible bombardment – treating the whole area as a military target – which is prohibited under the laws of war. Azerbaijani forces also attacked infrastructure that may have an unlawfully disproportionate impact on the civilian population. The use by Armenian and local Nargono-Karabakh forces of military bases and dual-use infrastructure in Stepanakert placed the civilian population unnecessarily at risk.

On September 27, fighting escalated between Azerbaijani and Armenian forces over the disputed territory of Nagorno-Karabakh, after Azerbaijan launched a military offensive.

Azerbaijani forces used explosive weapons with wide area effects in Stepanakert which can have indiscriminate impact on civilians and civilian objects.

Azerbaijan should investigate potential unlawful attacks on populated areas, ensure accountability for any violation, and commit to avoiding the use of explosive weapons with wide-area effects in populated areas.