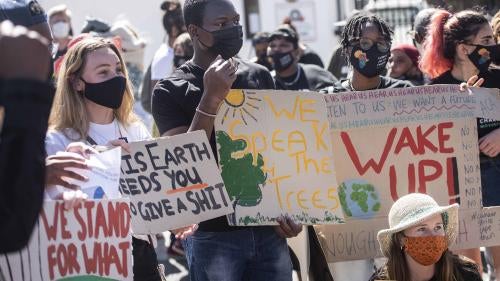 With Autocrats on the Defensive, Can Democrats Rise to the Occasion?

South Africa failed to take meaningful measures to improve protection of social and economic rights, which has been undermined by widespread unemployment, inequality, poverty, the government’s response to the Covid-19 pandemic, and corruption. The authorities struggled to ensure law enforcement responded effectively to some of the worst riots and looting in the country since the end of apartheid. The violent riots triggered by the imprisonment of former President Jacob Zuma for contempt of court claimed more than 330 lives and caused an estimated 50.4 billion rands (US$3.4 billion) in damage. Other human rights concerns include violence against women, failure to ensure justice and accountability for past xenophobic violence, and violence against environmental activists.

The killing of environmental rights activist, Mama Fikile Ntshangase, in her house in KwaZulu-Natal province, on October 22, 2020, highlighted the plight of rights defenders in mining-affected communities across the country. Activists have experienced threats, physical attacks, and damage to their property because of their activism—which police failed to investigate. There was no progress in identifying or arresting the killers of Sikhosiphi Rhadebe, a Xolobeni community activist killed in 2016 in the Eastern Cape province.

Ntshangase was a vice-chair of a subcommittee of the Mfolozi Community Environmental Justice Organization, a community-based organization that publicly denounced the impacts of the coal mine on their health and livelihoods and legally challenged the displacement of 19 families from their ancestral land to make way for expansion of a coal mine. As of November 2021, no arrests had been made in connection with Ntshangase’s killing.

On March 3, the United Nations expert on human rights defenders highlighted Ntshangase’s story in a report to the Human Rights Council on the risks faced by environmental defenders. On July 23, the UN special rapporteur on the rights to freedom of peaceful assembly and to freedom of association highlighted the killing of Ntshangase in his report as an example of the dangers women environmental human rights defenders are facing.

On June 29, South Africa’s Constitutional Court convicted and sentenced former president Zuma to 15 months' imprisonment for contempt of court. Zuma refused to obey the court’s order to appear before a judicial commission of Inquiry into allegations of state capture, corruption, and fraud in the public sector. In compliance, Zuma reported to a prison in KwaZulu Natal province on July 8, the first time a former president has been jailed in South Africa. Holding Zuma accountable has been celebrated as a victory for the rule of law and has confirmed South Africa’s robust democracy and independent judiciary.

On September 5, just over two months after his incarceration, the Ministry of Justice and Correctional Services announced that Zuma had been released on medical parole and would serve the remainder of his 15-month sentence under supervision in the community corrections system. On September 17, the Constitutional Court dismissed Zuma’s application to rescind his conviction.

During 2021, the authorities failed to ensure justice for xenophobic violence. While the 2019 National Action Plan  to combat xenophobia, racism, and discrimination marked a key step toward recognizing and addressing these abuses, it has not significantly improved accountability for xenophobic crimes.

Serious concerns remain about the conduct and capacity of the South African Police Services (SAPS), particularly its compliance with lawful use of force and its ability to deal with riots in a rights-respecting manner. Authorities have yet to end the rampant impunity that encourages abusive behavior by the police. They have not devoted adequate resources to improving police training, including training on the use of non-lethal weapons, legal and appropriate interrogation techniques and on human rights.

The SAPS used excessive and disproportionate force to disperse student protesters at the University of the Witwatersrand (Wits) on March 10, 2021, killing a bystander. The police initially failed to quell violent riots and massive looting that occurred following Zuma’s contempt of court conviction. The authorities later deployed 25,000 military troops to support the police to restore order. The riots, which President Cyril Ramaphosa labelled an attempted “insurrection,” were the worst since the end of apartheid in 1994.

Among countries that collect gender-based violence (GBV) statistics, South Africa has one of the highest rates of GBV in the world. Police statistics show that between 2019 and 2020, the rate of reported sexual offences in South Africa increased by an average of 146 incidences a day, 116 of which were cases of rape. In May, the Committee on the Elimination of Discrimination gainst Women (CEDAW), reported that South Africa’s low levels of prosecution and conviction in domestic violence cases and the frequent failures by the police to serve and enforce protection orders, exposed survivors to repeated abuses and resulted in the violation of women’s rights.

Covid 19 put the spotlight back on GBV as many experts worried about victims being locked down with perpetrators and unable to reach help. Some frontline health workers reported increases in cases of GBV.

In August, a 23-year-old University of Fort Hare law student Nosicelo Mtebeni was killed allegedly by her boyfriend. Parts of her dismembered body were found in the house she shared with her boyfriend, who was in custody facing murder charges at time of writing. On August 22, 28-year-old Ndivhuwo Munyai was shot, allegedly by her husband, a police sergeant in Thohoyandou, Limpopo Province, who then apparently turned the gun on himself in a murder suicide.

South Africa continues to criminalize sex work and prohibit other aspects of sex work, including running or owning a brothel, living off the earnings of “prostitution,” and enticing a woman into “prostitution.” Criminalization has undermined sex workers’ access to justice for crimes committed against them and exposed them to abuse and exploitation by law enforcement officials, including police officers.

In March, Human Rights Watch filed a submission with the South African Department of Home Affairs on the Draft Official Identity Management Policy to address the inadequacies in the current system which do not cater for changes in the gender/sex attribute of the identity system. In July, Human Rights Watch filed a submission with the Department of Justice and Constitutional Development on their Draft National Intervention Strategy (NIS) 2021-2025, that provides the framework to counter violence and discrimination based on sexual orientation, gender identity, gender expression and sex characteristics.

At least 19 LGBT persons were murdered in South Africa in 2021.

Across South Africa, more than 13 million children were affected by nationwide school closures (both full and partial) which lasted most of 2021, due to the Covid-19 pandemic. Children with disabilities, already most at risk of being excluded from accessing quality, were most impacted. Covid-19 remote learning response exacerbated existing inequalities as children from poor communities had limited access to online resources, leading to further exclusion.

Some 500,000 learners reportedly dropped out of school permanently during the pandemic, according to the United Nations International Children’s Emergency Fund (UNICEF).

South Africa has a high rate of teenage pregnancies. Adolescent girls and women face many barriers to their rights to education and sexual and reproductive rights, and tens of thousands experience unwanted pregnancies. Between 2017 and the first quarter of 2021, over 512,000 girls and young women ages 10 to 19 delivered children in health facilities and close to 57,000 terminated their pregnancies, according to government data.

As of October 3, 2021, South Africa had 2,906,422 confirmed Covid-19 cases with 87,780 deaths, the highest documented figure across Africa. The government’s Covid-19 aid programs, including food parcels, overlooked refugees and asylum seekers, including many LGBT people, and undocumented migrants, some of whom also faced barriers accessing shelters, either because there were unaware of these services, or they feel unwelcome at the shelters. Sex worker rights groups also noted that they had also been left out of relief planning.

At the end of September, more than 8.6 million people, that is over one-fifth of South Africa’s adult population, had been fully vaccinated. While the government committed to include refugees and asylum seekers with documentation in the country’s vaccination rollout, undocumented migrants faced barriers to vaccine access.

South Africa is among the top 20 emitters of greenhouse gases—and the top emitter in Africa. It is also among the world’s top 10 coal producers and fourth biggest exporter, contributing to the climate crisis that is taking a growing toll on human rights around the globe. Although South Africa has included renewable energy in its energy mix, it continues to heavily rely on coal for 70 percent of energy demand, and government has declared that this will be the case for the foreseeable future.

In March, the government proposed its Nationally Determined Contribution (NDC), a Paris Agreement-mandated five-year national climate change action plan. In June 2021, the Presidential Climate Commissions recommended that the plan be strengthened to prevent warming greater than 1.5°C compared to pre-industrial levels, with the hope of averting some of the most dramatic impacts of climate change on at-risk populations.

As a water-scarce country, South Africa is particularly vulnerable to the impacts of climate change. Droughts and storms have become more intense because of climate change. On 24 January 2021, Cyclone Eloise made landfall in South Africa’s northern provinces, resulting in extreme flooding and the displacement of 3,200 people.

In July, the ruling African National Congress party called on the government of Eswatini to implement political reforms and address the legitimate concerns of protestors. In the same month, South Africa, as a member state of the Southern African Development Community, approved the deployment of 1,495 troops to help Mozambique fight an Islamic State-linked insurgency. President Cyril Ramaphosa’s special envoys appointed in August 2020 to mediate in the Zimbabwe political crisis, remained, for the most part, inactive during 2021.

In his address to the 76th UN General Assembly on September 23, President Ramaphosa reiterated the call for fair and equitable distribution of Covid-19 vaccines across the world.