Questions and Answers on Sanctions and Banking Restrictions on the Taliban 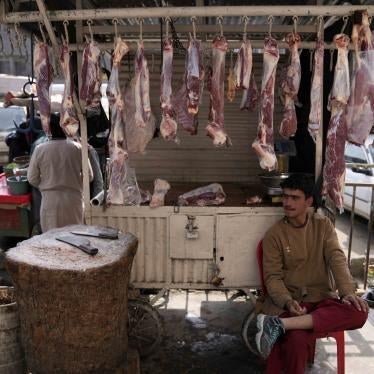 The US and other governments and the World Bank Group revoked the credentials of the Central Bank of Afghanistan after the Taliban takeover on August 15, 2021. The US air strike on July 30, 2022, killing the al-Qaeda leader Ayman al-Zawahri, should not derail ongoing discussions between the US and Afghanistan to urgently reach an agreement allowing ordinary Afghans to engage in legitimate commercial activity.

“Afghanistan’s intensifying hunger and health crisis is urgent and at its root a banking crisis,” said John Sifton, Asia advocacy director at Human Rights Watch. “Regardless of the Taliban’s status or credibility with outside governments, international economic restrictions are still driving the country’s catastrophe and hurting the Afghan people.”

Despite actions by the US and others to license banking transactions with Afghan entities, Afghanistan’s central bank remains unable to access its foreign currency reserves or process or receive most international transactions. As a result, the country continues to suffer from a major liquidity crisis and lack of banknotes. Businesses, humanitarian groups, and private banks continue to report extensive restrictions on their operational capacities. At the same time, because outside donors have severely cut funding to support Afghanistan health, education, and other essential sectors, millions of Afghans have lost their incomes.

Acute malnutrition is entrenched across Afghanistan, even though food and basic supplies are available in markets throughout the country. An Afghan humanitarian official told Human Rights Watch in mid-July, “People have nothing to eat. You may not imagine it, but children are starving…. The situation is dire, especially if you go to the villages.” He said he knew of one family who had lost two children, ages 5 and 2, to starvation in the last two months: “This is unbelievable in 2022.” He said that he knew of no shortages in food supplies and that the causes of the crisis were economic: “A functioning banking system is an immediate and crucial need to address the humanitarian crisis.”

Almost 20 million people – half the population – are suffering either level-3 “crisis” or level-4 “emergency” levels of food insecurity under the assessment system of the World Food Programme (WFP). Over one million children under 5 – especially at risk of dying when deprived of food – are suffering from prolonged acute malnutrition, meaning that even if they survive, they face significant health problems, including stunting. Recently, the WFP reported that tens of thousands of people in one province, Ghor, had slipped into “catastrophic” level-5 acute malnutrition, a precursor to famine.

Overall, more than 90 percent of Afghans have been suffering from some form of food insecurity since last August, skipping meals or whole days of eating and engaging in extreme coping mechanisms to pay for food, including sending children to work. Afghanistan’s economic collapse was caused in part by a collapse in most families’ incomes following the Taliban takeover and foreign donors’ decisions to suspend outside budgetary support for numerous government, humanitarian, and development sectors, including education and health.

US and World Bank decisions to restrict Afghanistan’s banking sector have significantly amplified the crisis by hampering most legitimate economic activities, including humanitarian efforts. The Central Bank of Afghanistan is unable to carry out basic central banking functions, including holding currency auctions, importing banknotes, and processing or settling legitimate commercial and humanitarian transactions. Because of these incapacities, even basic economic activities remain severely curtailed.

“Importers are struggling to pay for goods, humanitarian groups are facing problems with basic operations, and the Afghan diaspora can’t send enough money to their relatives and friends,” Sifton said. “Millions of hungry Afghans are experiencing the abysmal reality of seeing food at the market but being unable to purchase it.”

Making matters worse, Afghanistan’s economic crisis is occurring as inflation and cost increases have been accelerating, with an over 50 percent increase for basic household items since July 2021. According to World Bank data, prices for staples such as rice and wheat have almost doubled in the last two months. At the same time, prices for agricultural inputs like fertilizer and fuel have doubled, and they are in short supply, meaning Afghanistan’s own domestic food production is set to decrease in 2022.

The crisis’ impact on women and girls is especially severe. An Afghan woman working for a civil society group said that restrictions on women’s basic rights to freedom of movement and work have made it difficult “even for educated women who used to be financially independent,” and fall particularly hard on widows. “Pregnant women are really affected by the situation, especially because of the limited access to health care. I know dozens of widowed women who send me messages every day asking for help.”

Afghanistan’s humanitarian situation would be even worse had the United Nations and other aid providers not substantially increased their operations in 2022, Human Rights Watch said. As the World Food Programme stated in a food security assessment for June through November 2022, “The severity of the situation is only partially mitigated by the unprecedented surge of humanitarian assistance that covers 38 percent of the total population of Afghanistan in the current period. In the absence of such assistance, the magnitude and severity of needs would be dramatically higher.”

The Taliban leadership should recognize that their poor human rights record is imperiling hopes to reach any agreements to resolve the banking crisis, Human Rights Watch said. Since last August, the authorities have imposed strict restrictions on women and girls that violate their rights to education, work, health care, and freedom of movement and speech. Taliban authorities have also suppressed media and arbitrarily detained and at times executed perceived critics or opponents.

Taliban authorities are reportedly prepared to accept independent monitoring of the central bank by outside auditors, a key demand of the US government and World Bank. But they continue to reject key demands from governments to remove sanctioned officials from the central bank’s leadership and to reverse their position denying secondary education to girls and women.

“The Taliban seem more interested in restricting the human rights of Afghan women and girls than in preventing starvation,” Sifton said. “If their leadership is seeking legitimacy, they need to rethink their priorities.”